Joined the Team Heal Japan guys yesterday on a trip back up to Iwaki in Fukushima, this time on clean-up duty. We didn’t know where we’d actually be needed till we’d reported to the Iwaki volunteer centre where we were given a clean-up job up in Yotsukura, another favourite weekend surfing spot in days gone by.

Apparently the number of volunteers has dropped off significantly since the Golden Week holidays in early May so it seemed a good time to hook up with these guys. Iwaki is about 3 hours from Tokyo. I used to regularly bolt up here early on a Saturday morning for a one-day surf-trip so why not to do the same thing now. 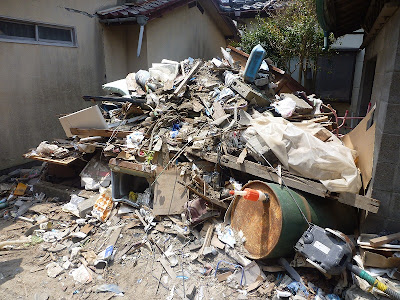 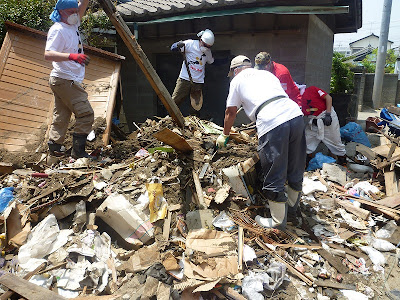 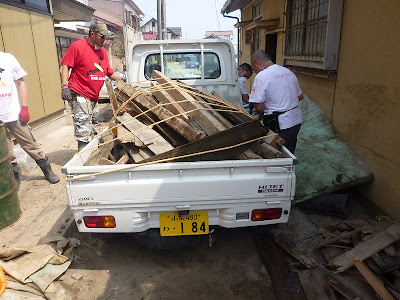 It’s not just as simple as shoveling it all into a wheelbarrow and trucking it off, everything has to be separated into burnable, non-burnable, wood, metal, stone, soil etc. They won't let you dispose of it at the proper sites if it’s all mixed up. There’s also so much debris that no-one’s sure exactly where it’s going to go. 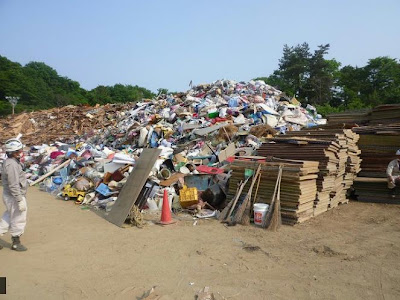 The latest figures reckon that 280,000 homes have been damaged in addition to those destroyed, but they are far from finished counting yet. It took ten of us a full day to shift and sort this pile of rubble and that was with the owner chipping in so I’ll let you figure out how many months or more likely years it's going to take and how many people are needed to get through everything.
On the day of the tsunami the husband was in work about 30 minutes away and his wife was in the house on her own. They're the couple in the middle of the top picture. She said she couldn't hear any emergency announcements across the town's emergency PA system so when the TV reported a tsunami of 6 metres was headed their way, no-one in their street really believed it. After a strong earthquake they usually got a 20cm or 30 cm or 50 cm tsunami warning so even though this earthquake had been a belter, the word on the street was that the TV must have meant 60cms, no-one could believe it was really going to be 6 metres.
The wave rushed into the house and she was soon up to her shoulders in water in the middle of her living room. With the water rushing through the house she was pinned to the back wall and couldn’t move forward far enough to reach the stairs and the safety of the second floor, she just had to cover up and wait and hope the waters didn’t get any higher. She had no idea how long it went on for but the next morning she was black and blue with bruises from all the debris banging up against her while she was in the water.
One of her neighbours from across the road wasn’t so lucky and died, his body was found ten days later. His next-door-neighbour was washed across the road and into her front yard where he managed to scramble up a maple tree and cling on. he now calls it the Tree of Life. They are now living with their daughter about 20 minutes away, he still has his part-time job so they hope to rebuild the house soon. There were a few tears from the pair of them as they shared their story and thanked everyone for coming, but overall, they just couldn't stop smiling.
Anyway, hats off to Sean Muramatsu and the Team Heal Japan guys, they seem to really have it sorted and will be doing regular trips up here for the foreseeable future. If you're in Japan, click on the Team Heal Japan link, or find them on facebook, get in touch and come and join us. Hopefully we can get lots more folks along. There'll be a PayPal link on the website soon for donations to keep these trips going. 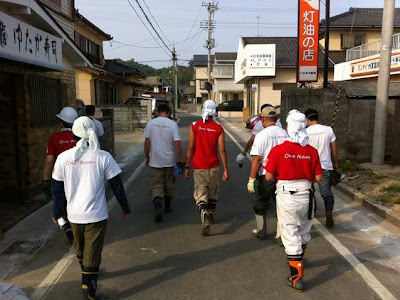