You couldn't write it

Last Tuesday, three days after cleaning out Granny's Place up North in Fukushima I finished work earlier than usual and took my mate up on an offer to go to a favourite place of his, Jitokko in Meguro. Not my usual area to hang out but he usually knows some good spots and I felt like a change so jumped at the chance. 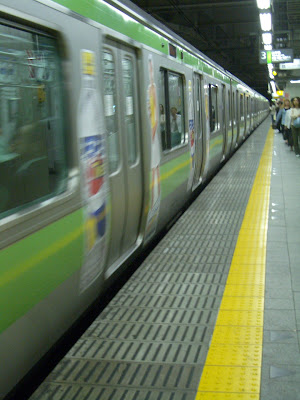 It meant changing trains in Ebisu for one stop on the Yamanote line down to Meguro, just a two-minute trip. I used to ride the Yamanote line to work every day when I worked in Shinjuku but almost never after work these days.
As we jammed ourselves into the train at Ebisu, I found myself standing next to a woman who looked sort of familiar. I thought she was looking at me as if she may have recognized me but wasn't too sure. I certainly didn't want to get arrested by staring too much and scaring her into calling the police like I was some kind of groper or stalker so there was a full minute where we were both kind of avoiding eye contact and both thinking, “no it can’t be... can it?”. Then it hit me so I leaned across and asked "Fukushima?" which was followed by a full minute of unbelievable surprise as we both realized yes, it really was. It was the grandaughter who we'd helped three days ago.

I know coincidences happen, I know it's a small world, but to meet her, three days later, in a city of 35 million people, on a 2-minute crowded train that I don't normally ride has really got me thinking. There were more tears from her and we're hoping to meet up again with all the rest of the team soon.
When I got to my mate's new bar, there was a surprise as one of the girl's working there used to work at Mott's Bar in Shinjuku and is the girl in this picture I took over a year ago. She left Mott's a few months back and we weren't sure where she was working now, and then she turns up at my mate's new local.
Actually that second coincidence would have been much better on any other day, but after just meeting the grandaughter, it just didn't seem that unusual...
at 16:58
Email ThisBlogThis!Share to TwitterShare to FacebookShare to Pinterest
Labels: Team Heal Japan