Boxes and Balloons back in Yotuskura

Two weeks ago I was back up in Iwaki with THJ to help clear out a part of a property that was 2kms from the ocean, unaffected by the tsunami but damaged beyond repair by the earthquake. 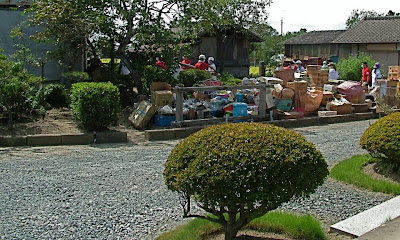 It was one of the most straightforward jobs we've taken on so far with 27 of us lining up to pull out old boxes, furniture, clothers, lamps, baskets, power tools, basically anything you could ever think of finding in someone's attic or shed and piling it up outside so that the owners could safey store it somewhere else and knock down the two knackered buildings. 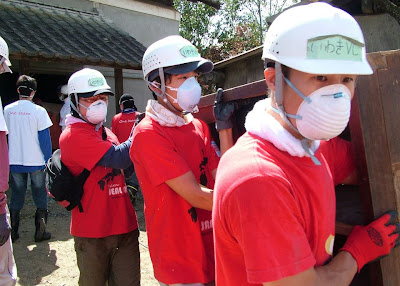 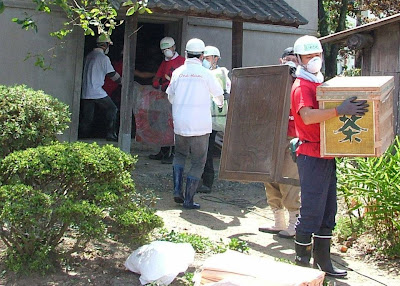 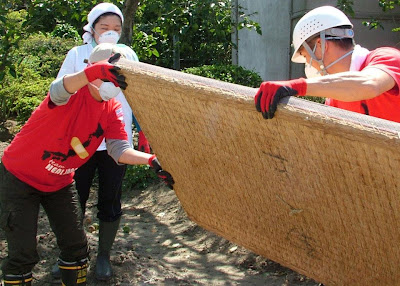 The first floor was simple enough but things slowed down when we got to the second floor. The roof had cracked open in the earthquake and 6 months of being open to the rain meant that the attic flooring was rotten in some parts and wouldn't hold any extra weight. 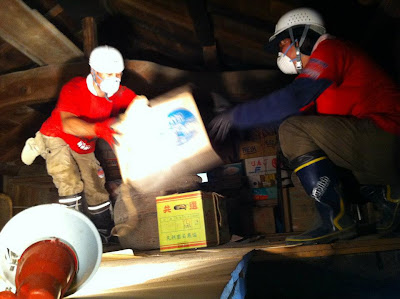 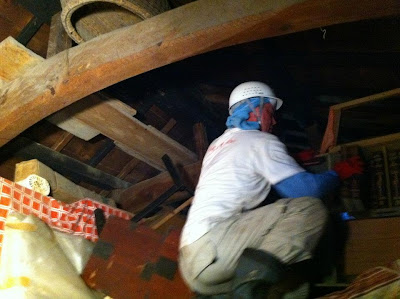 At one point, there was a box of books we needed to get out but I couldn't pick it up and pass the whole box down as the extra weight would have taken us both through the floor so I just had to pass down the books one at a time for the other 26 folks to hand to each other and pile up in another corner. A waste of time for a while but hopefully they all knew what was going on. 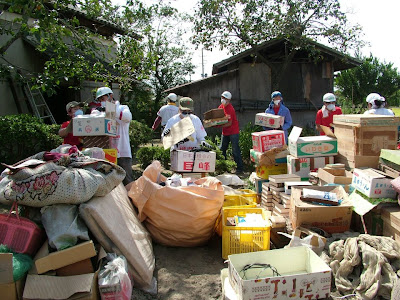 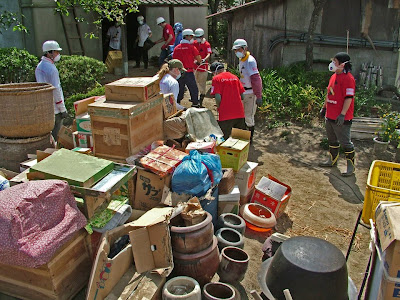 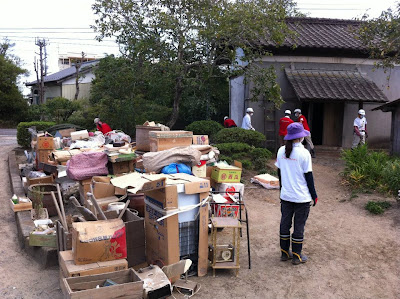 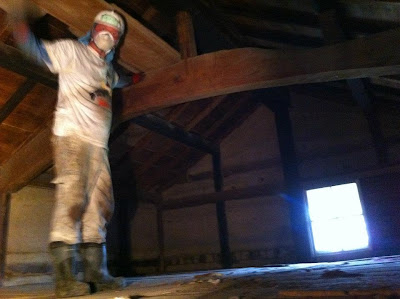 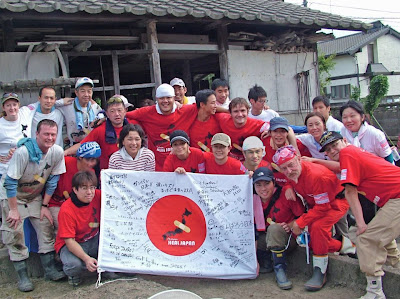 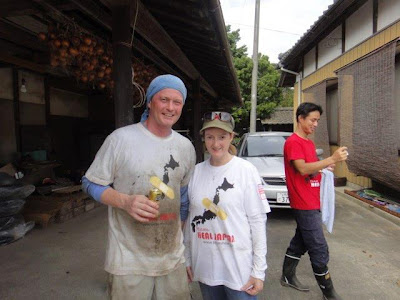 We got it all done early though and had some extra time to chat with the mother and two kids as the day went on. The two young girls of the family were about 6 and 10 years old I think. Luckily for them our resident entertainer Dirk Rebel was with us as always. Dirk's the guy who was so good with grandaughter of The Painter that we helped out last July. He does a mean line in balloon animals and has a real gift with kids. I don't think these llittle girls had laughed so much since the earthquake, and for me that was more important than any lifting and carrying work we'd done that day. 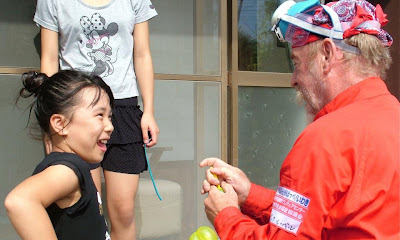 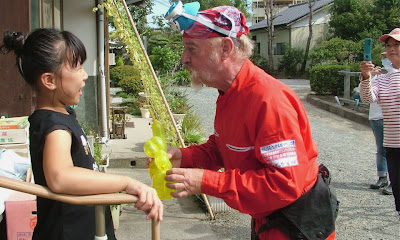 Mum taking a video with her mobile phone. 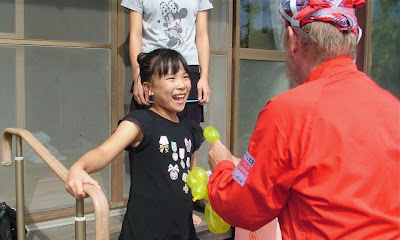 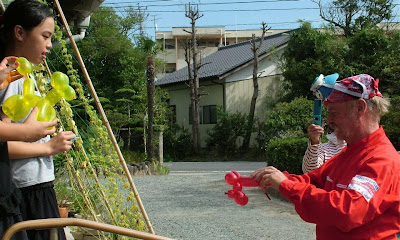 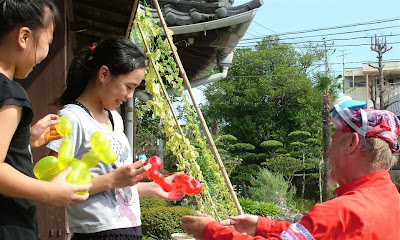 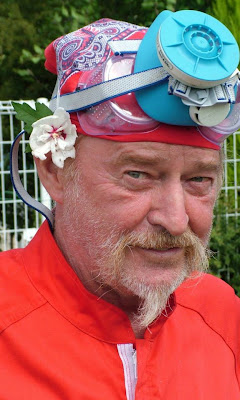 As we were leaving, the mother called Dirk over for her daughter to hand him a hand-written thank-you letter, all colourfully written with stars and stickers on it that just oozed with gratitude. One for the cigar-box for sure.

The father wasn't there that day but he also surfs and was a regular at my beloved Kumagawa, only 4kms South of the reactor. We doubt we'll ever be able to get near there again for many, many years, if ever. A sobering thought, and one that's made me determined to join any of the growing anti-nuclear protests that are becoming common in Tokyo. This is a pic of Kumagawa on a flat day in 2004 and you can just about see the infamous Daiichi nuclear reactor in the background. Their house was 35kms from the reactor and they were obviously worried about the radiation but had very little info from the government. We measured around there and compared to a 0.1 or 0.15 uSv/hr in Tokyo, it was up to between 0.25 and 0.4 at their house which was pretty much what they were expecting. 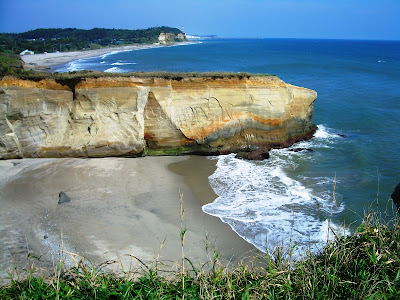 These areas around the reactor used to be a little piece of heaven for me and are now NO-GO areas. There are kids being brought up even further North and more worryingly North-West of the 20km and 30km zones in contaminated areas who had no say in where they were born and are just being left behind by the government who refuse to relocate them.

Fukushima used to be a coal-mining area, much like my native South Wales. Just as they did in South Wales, the Japanese government closed down all the mines when they decided to move away from the coal industry and invest in nuclear power. The locals all lost their mining jobs through the 50s and 60s, but then the government came to the "rescue" with the offer of work at the two nuclear plants they planned to open in Fukushima. Nice bit of work for 40 years or so... but it's not just jobs they've lost this time around. 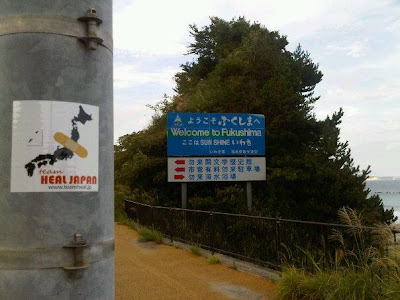 We took the coast road on the way back and stopped at the Welcome to Fukushima sign on the border with Ibaraki. In days gone by, this was the spot where I'd get a first good look at the Fukushima coastline and if there were waves, get a bit of a rush knowing I'd be in the water soon far from the city life in Tokyo.

With so many problems for this area, it was a privilege to spend another day with a great team of folks, meeting a bunch of new people who really bring some much-needed relief and happiness to the people of Fukushima. Team HEAL Japan.


Thanks to Dirk, Sean and others for the photos this time.
at 11:18
Email ThisBlogThis!Share to TwitterShare to FacebookShare to Pinterest