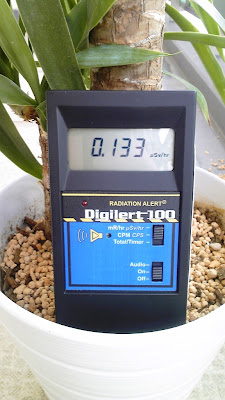 JAPAN
I'd been thinking about buying a geiger counter for a while、ｔhe problem was always the high price and the long delivery time. We usually have a Russian-made model on the trips up to Iwaki with us so it was never really a priority but finally I realized I needed to get off my arse and get one sorted. They aren't cheap even for a low-end jobber and there was always a 2-3 month or more wait to get it shipped.

I'd heard good things about this Digilert 100 made in the USA so I rang their Japanese distribtuor since their website says that if you're in Japan, you can only buy from their exclusive distributor, SOWA Industries. Fair enough but they were out of stock and estimated about 3 months before they could get more in. I spent all the next day ringing some of their other worldwide partners in New Zealand, Australia, Hong Kong, Singapore, South Africa, France, Denmark, UK, Argentina and finally a few in the US but every one of them was out of stock. Worse than that, every single distributor outside of Japan was charging half the price of their exclusive distributor in Japan, SOWA Industries. Nothing like a bit of profiteering is there! Bastards.

My last call was to another UK distributor that I'd missed on the first run through. I called them expecting the same answer but the guy said he'd just had an over-shipment from the factory and could ship one out to me the next day, and still at half the Japanese price! Result! Done, dusted and forever greateful to both sisters who at really short notice helped with a bit of innocent money-laundering to get around the rule (well more of a guideline) of not shipping to Japan.

Came in handy as a backup unit on last weekend's THJ trip to Iwaki and will continue to do so in the future. The readings vary quite a lot since radiation is random in nature but the top photo above is one I took on my balcony in Japan on the weekend. The photo below is one my sister took in her kitchen in Cambridge, England before sending it over. Let's hope it stays like that. 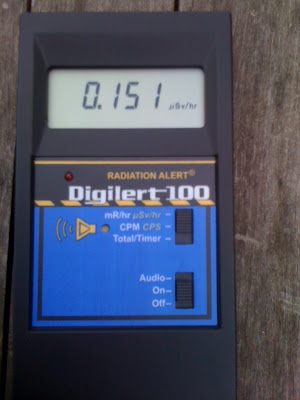 at 19:04
Email ThisBlogThis!Share to TwitterShare to FacebookShare to Pinterest