In 2004 I had a pretty uneventful surf at Kitaizumi in Minamisoma, Fukushima. It was only waist-high but I remember sharing an early morning, glassy peak with three locals for an hour or two. Like a lot of Fukushima’s coastline, long lines of orange-tinted cliffs and the ever-present tetrapods stretch to the South, but the North side of the bay is dominated by the TEPCO thermal power plant which came online in 1997.

It’s a similar story 50km South at Iwasawa, where one of the most consistent beachbreaks in the area breaks right next to TEPCO’s oil-fired power station at Hirono built in the late 70s. About half-way between the two is Kumagawa, a small rivermouth/beachbreak just a few km South of the Fukushima Daiichi nuclear plant which started up in 1971. Fukushima Daini is another nuclear plant about 10km below Daiichi.

After the coal industry in Fukushima, particularly the Joban coalfield in Iwaki closed down in the 60s, power plants like these filled the local employment void and blots on the landscape became a necessary evil. TEPCO made surface concessions to keep the locals happy while trumpeting the safety of nuclear power. Near Kitaizumi, they even sponsored a woodland area with nature trails called TEPCO Green Park.


It was a mellow, uneventful surf but I’ve been thinking about that session a lot more since I started driving a delivery truck back up to that area as part of the Save Minamisoma Project. I first joined these guys a couple of months ago in early April and had chance to go back up there again last weekend. The SMP are funded entirely by donations and do a trip every two weeks delivering food and safe drinking water to people who 15 months after the disaster are still living in temporary housing.
In Minamisoma alone there are over 8,000 people still living in temporary housing who either lost their homes in the tsunami or had to be evacuated from homes too close to the reactor in which case they may never be able to go back. I’ll write more about volunteering with the SMP later but they do much more than just deliver food and water. It’s about letting the residents know they aren’t forgotten by making the trip to see them every couple of weeks, and just spending some time to chat, listen and laugh together. You can read more about their great work here.
In a perfect world there’d be no need for these trips any more, but since the world ain’t perfect, the SMP plan to keep on making these trips as long as the local volunteers and residents keep inviting us.

Minamisoma itself, like Iwaki to the South has been relatively lucky in regard to radiation. The winds were blowing from the SE when the bulk of the radiation was released last March meaning that the coast near here, about 20-30km North of the reactor has pretty normal levels. It’s as you go inland and up towards the mountains, past towns like Iitate and Date, and then further on towards Koriyama and Fukushima City that the radiation levels really start to spike. Even though levels here are higher than those found in the old 20km and 30km zones the government still refuses to provide any assistance for families to evacuate.
The old 20km and 30km radius limits were pretty much meaningless as a safety guide anyway since much higher radiation can be found much further away to the North-East and then back South West again. You can see a map of the affected areas here.
Although this map is made from government data provided by MEXT, the Ministry of Education, Culture, Sports Science and Technology, it seems to be pretty accurate compared to real measurements I’ve taken around there.

The beach at Kitaizumi is 26kms North of the reactor so on the drive down there before we had to start the deliveries, even on a hot, sunny Sunday morning, I wasn’t expecting to see anyone in the water. As expected, the Haramachi Seaside Park area had been completely swept away and the power station on my left was the only thing still recognizable from eight years ago, but there were quite a few cars parked up.
Clambering up the verge I couldn’t believe it, once again it was small and glassy, but there were 25 guys out! The only way I knew I was in the right spot was to look out at the waves, the half-smashed up terraced embankment leading down to the sand, the cliffs to the right and the power station to the left. Nothing was recognizable when I turned around and looked inland. All the concrete tetrapods, that used to sit 50 yards out to sea just to the South were now thrown up against the foot of the cliff like a set of jacks. There were no families enjoying the hot summer weather, no dog-walkers, no beach-goers... just the surfers. 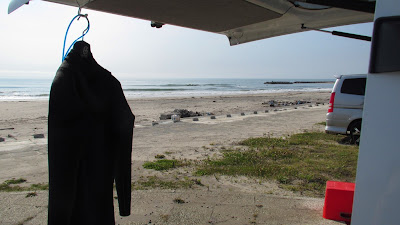 You need to take an average reading 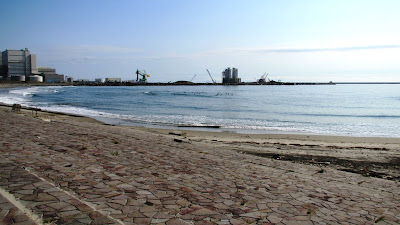 I caught up with a guy who’d just got out of the water, he asked where I was from and if I was scared of the radiation, the exact question I was thinking about how to ask him. From his point of view, he was a Minamisoma local; he was born here, lived here and like the other locals they’d got used to it. The plant may still be unstable, no-one knows for sure, but if you’re a local and have grown up surfing these breaks, and you know from taking your own measurements that the radiation levels at the beach are the same as the levels in Tokyo (averaging 0.12uSv/hr where I measured) and in town they are only slightly elevated (at around 0.2-0.3uSv/hr) then for them they are just taking a calculated risk, like other surfers might take with sunburn, shallow reefs, or sharks.
You could argue there’s nothing calculated about surfing so close to the reactor when no-one knows for sure what’s going on, but just as an example, is it really any more calculated to paddle out in South Africa, South Australia or any other place where surfers have been taken by sharks? The locals here probably think those guys are the ones off their head.

This also has nothing to do with taking a stance on nuclear power, it’s a decision that’s been forced on these surfers as they’ve watched their empty local breaks firing like they have done for years. Radiation at the beach is lower than the readings they see in town, the same as in Tokyo, so over time, they’ve talked themselves into it. If I lived here, I’d have done the same.


Thanks to TEPCO, these guys now have to add one more factor to their “is-it-worth-a-dip” equation. Wave-height, number of people out, wind-direction, stage-of-the-tide, how-much-water-over-the-reef… and now radiation. Maybe these days they also avoid rivermouths especially after heavy rains to factor in any extra radiation that might be washed down from the hotspots in the mountains, but they're out there.
I was brought up surfing the relatively safe waters of S. Wales. When I first got to Australia in 1988 it took a while for me to get my head around surfing spots where I was sure sharks were lurking. Talking to the locals about it, you’d usually get two different responses depending on the stance you took. If you said you were scared of sharks, they’d laugh at you for being some sort of pommie poofter and tell you there was nothing to worry about. If you said their shark stories were exaggerated, they’d fix you with a steely glare and tell you any number of old shark stories, like the time a pack of 600 hammerheads cruised down the coast past Narrabeen with a shark-patrol helicopter flying ahead warning everyone to get out of the water.

The usual attitude though was “no worries”. One guy summed it up best when he told me (incorrectly) not to worry about sharks since I’d only ever get bothered by a Great White, and if I did, it would all happen so fast that I wouldn’t know anything about it anyway… so just get out there!
Then there was Phil Horley one of the Cactus locals in South Australia known as Sharkbait, or Sharky after being attacked surfing Outside Castles in 1977. He went on to be “bumped” another twice at the same spot before being killed years later in a car crash. Imagine surviving three close encounters with a Great White and then dying in a bloody car crash!  You can take all the precautions you like, but if you’re not doing the thing you love, are you really living?
In any surf community there will always be a group of guys who are out there charging when it’s big, guys who’ll sit that bit further inside and take off on anything, guys who will paddle out when no-one else will. That could have been what happened in Minamisoma. The local crew could only watch the empty waves go by unridden for so long before one day, maybe when it just got too perfect to watch from the beach anymore, one or two guys just suited up, got out there and the rest followed.


Away from crowded city beaches, surfing has always been one of the best ways I know to relax. Away from life’s problems, away from the job, relationship hassles, away from anything dragging you down and give you a little time to yourself, a little time to refocus. I read in an old SURFER mag that surfers were lucky that in times of stress we could jump off the edge of any continent we like and spend a few hours laughing back at the world and all its problems. Good on these boys for deciding to get back in the water, with all the issues they face on land, it’s doing a damn site more to keep them sane than watching the news or trawling the internet.

I wish I'd had more time to talk to these guys that Sunday morning but I had to get back into town for the temporary housing deliveries… I’ll be back though for sure.

at 13:03
Email ThisBlogThis!Share to TwitterShare to FacebookShare to Pinterest