Last week, one of the THJ guys, Murooka-san, brought along a handheld geiger counter up to Fukushima. There’s a 6-8 week waiting list for them in Japan these days but it had finally arrived. In Tokyo before we left it was reading around 0.15 microSieverts/hour, which seems to be around average. It’s hard to find data on the web that isn’t provided by the nuclear companies but according to Wikipedia, the average individual background radiation dose is 0.23μSv/h (0.00023mSv/h); 0.17μSv/h for Australians and 0.34μSv/h for Americans. (scroll down to the bit about hourly dose examples here)

Up at the volunteer centre in Iwaki City which is about 50 kms from the reactor, it was reading about 0.25 microSieverts/hour. When we got to the cleanup location a bit further North just under 40kms from the reactor and where people are still living, it read between 0.25 and 0.42, and peaked at 0.57 microSieverts/hour as the rain came down. We'll check again this weekend but basically, what we saw agreed with the official readings available online.

To extrapolate the per-hour readings to per-year values, you’d think just multiply the hourly reading by 24, then multiply by 365, but sometimes the figure is adjusted down because people spend a lot of time indoors sleeping etc where the levels are lower than outdoors. Some say the max recommended level is 1 milliSievert per year, some say it’s 5 milliSieverts per year, others say it’s up to 20. Either way, looking at our worst case exposure, the max we saw of 0.57 microSieverts/hour works out to an annual dose of 5 milliSieverts per year. That’s a full year of standing outside, 24 hours a day, less than 40kms from the plant. Since we’re only up there for 7-hours once a week or so, we got much, much less.

On the way home, I started thinking about my annual health check. Unusually for the rest of the world, in Japan most company health-checks include a barium meal, probably because stomach cancer is the most common cancer in Japan. The readings I found online for a barium meal varied from 2 milliSieverts on the NHS site to a whopping 15 milliSieverts on a private page written by what could have been the dubiously named Dr.Geoff Pain. Not knowing who to believe, again, I checked with the Medical Centre where I had my annual checkup only a few weeks ago. The nurse there was very helpful but had no idea and disappeared for 10 minutes to look up how many milliSieverts was in one dose.

She came back looking shocked saying it was actually between 10 and 20 milliSieverts (10,000 and 20,000 microSieverts) in one hit!  Dr Pain was right on the money. Whether it was 10 or 20 varied depending on your body type and how long your body took to get rid of it.

Although one big concentrated hit of radiation is not the same as prolonged exposure at a much lower level, depending on what Fukushima reading you took, and depending on how your body handles it, one medical checkup packed the equivalent punch of standing outside, 24 hours a day, less than 40kms from the nuclear plant, for between 2 to 10 YEARS!! And I’ve had four of the buggers!


They’re not even that reliable. A friend of mine had a barium meal in February 2010 and got the all-clear. He was then diagnosed with stomach cancer three months later and had to have ¾ of his stomach removed. Luckily he’s over it now and fitter than me these days.

Stomach camera option for me next year!
at 20:47 No comments:
Email ThisBlogThis!Share to TwitterShare to FacebookShare to Pinterest
Labels: Fukushima, Radiation, Team Heal Japan, Tsunami

Not much time for bloggage it seems these days. I just got back yesterday again from Fukushima with Team Heal Japan but I'll update that one later as I haven't talked about the trip we did a week ago yet.

These THJ trips are starting to gain a bit of momentum now. On June 18th, 27 of us went up by coach from Tokyo and hooked up with another 3 guys up there making 30 of us. The 3 extra guys included David Lee from the UK-based Helping Hands For Japan who were on their way further North. More about them in a later post I hope.

When we arrived at our designated clean-up site, as we were parking the bus, I could see the guy who's house we cleaned up last week. Classic guy, he must have contacted the volunteer centre, found out where we'd be today and turned up with his wife to say hello and thank us again.

The house we'd been assigned this time was a solidly-enough built brick house. Some houses nearby had disappeared but this one had also been hit hard.

The ground floor had all sorts of debris, rocks, papers, glass, furniture and tatami mats strewn throughout which needed to be cleared out, separated and dumped.

Jospeh Tait from New Zealand, great guy, rugby fanatic and a quarter Maori. We told him this wardrobe was made in France. It didn't stand a chance.


As you get stuck into these mountains of rubbish you need to remember to keep an eye out for photos, letters, and other mementos that have been dragged through the dirt. We usually end up with quite a full box of this stuff which in some cases can be worth the world to the owners, or even more to the families of the owners.

There was the usual pile at this house too but not only letters and photos, the tee-total owner turned out to have been an avid whisky collector. As we dug through all this stuff, we kept on turning up all sorts of miniatures, full-size rareties, gimmick bottles and one-off collector's items from all over the world. We must have found over a hundred bottles by the end of the day. Safely stored with all the other important things of course.

They said we could take some home with us but by the time we were heading home, we all must have thought someone else was taking care of it and came home with nothing. So much for teamwork!!

Anyway, met another great bunch of people, and hopefully there's some whisky waiting for us up there somewhere.

at 23:59 No comments:
Email ThisBlogThis!Share to TwitterShare to FacebookShare to Pinterest
Labels: Team Heal Japan, Tsunami

It's starting to heat up here, low-to-mid 20s now but into the high-20s next week. July and August can get up to the high-30s and well humid so with all the air-con that homes, businesses, schools, stations, hospitals, shops, bars, restaurants, host-bars, maid-cafes and S&M bars crank up, summer is always a high electricity-usage time of year.

Japan is currently running 19 of the 54 nucelar reactors that were in operation before the earthquake. Some have been shut down for short term maintenance upgrades, some longer-term and of course the notable meltdown/explosion... so power ain't as easy to come by as it used to be.

I couldn't get to the demo in Shibuya last Saturday but the anti-nuclear rallies in Tokyo are getting bigger with thousands turning up trying to drive a new focus on renewable energies which has to be a good thing.

In the meantime, I've noticed these power-usage graphics appearing at the end of the news. After the weather and between the UV index and the clothes-drying forecast. 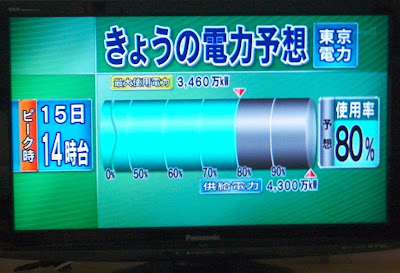 This one shows Tokyo's total power generating capcity of 43 million kW and the expected power usage for the day. I took this yesterday on June 15th when they expected the peak usage to be 80% at 2pm. Once it gets to around 90% they start to plan scheduled blackouts to try and manage the demand. 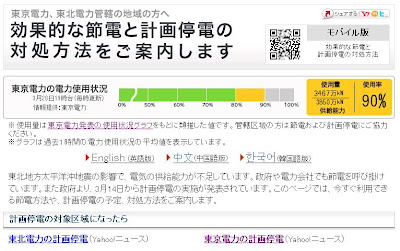 Yahoo Japan's home page has had something similar since the earthquake showing the real-time actual power usage. The pic above was from March 28 when we were in the middle of the rolling blackouts and at 92%. There seems to be another 4.5 million kW available now... but doubt it'll be enough.

I'm not sure if the Ice Bar Tokyo in Ginza will, or should, keep going through the summer. 40 degrees C outside, most of Japan facing power cuts and these guys still want to "magically transport you to the arctic"!  Good to see these trendsetters have got their finger on the pulse of public opinion.
at 23:20 No comments:
Email ThisBlogThis!Share to TwitterShare to FacebookShare to Pinterest
Labels: Earthquake, Power

Back up to Iwaki last weekend with Team Heal Japan this time clearing out smashed up houses near Hisanohama. One of the owners was a big bear of a bloke, someone you'd be glad to have on your side in a pub-fight.

He was telling me his family was originally from a village just up above on the hillside. He'd always loved the ocean as a kid so saved all his money and finally moved his family down the hill, into his dream house by the beach about 9 years ago. Now he's going to have to rebuild back up on top and his insurance probably won't cover it. He still loves the ocean though, despite everything... just can't live next to it any more.

We found a couple of unopened bottles of whisky in the rubble. One was a supermarket cheapy but the other was a 17-year old Nikka, a surprisingly fine drop. He made us take them both home and waved us off jumping up and down like a 5-year old kid with tears in his eyes. I'd say we're even. 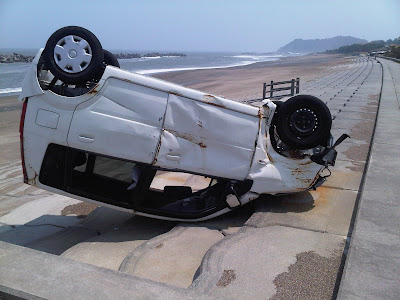 I think I've mentioned before how similar Fukushima and Iwaki is to S. Wales. Same size towns, similar countryside, same cold winters, (NOT the same hot summers) same grey/green/blue sea, ex-coal-mining community... till the government closed all the mines down in the 60s. And on top of all that, I couldn't help think of Aberavon looking at this.