Last week’s trip up to Iwaki on Saturday Nov 11 was a bit different. The official volunteer centre run by the council has now officially closed, although they are still keeping a core of staff who will continue to liaise with volunteer groups to get help where it’s still needed. This time though we’d been invited up with about 500 others as part of a thank-you event the volunteer centre and council had arranged for those who had volunteered since the VC first opened on March 16.

The numbers were interesting. Since March 16, 14,452 volunteers had registered with the centre. The total number of participations was 49,986 in around 8 months which meant each volunteer had volunteered an average of about 3.5 times each. There had been 6,869 individual clean-up jobs requested of which they'd been able to fulfil 6,853, so if you include weekdays and weekends, there was an average of something like 208 volunteers per day, assigned to over 28 jobs per day, for nearly 8 months.

Since the event wasn't starting till 1:30pm, we were able to leave at a much more reasonable 9am and planned to pick up 21 takeaway lunches from Hataya supermarket in Hisanohama where we’d been so well received on the last trip. Also a way to give some money back to the local businesses instead of bringing food up from Tokyo. This time Daisuke was with us. Daisuke was one of the nine THJ members who helped with the original cleanup of the supermarket back in June but he missed the reunion last week so I was looking forward to re-introducing him to the mother and grandmother. Everything had been pretty much prepared in boxes for us to take and eat on the bus heading back to Iwaki as time was running short.

Unfortunately the first chance to re-introduce him to the family came as Sean was trying to pay for the lunches. You can imagine what followed with them refusing to take any payment and us nicely telling them that we didn’t come for a free meal and really wanted to pay. I mean we wanted to help them out , not make them pay for 21 lunches! Sean could see they weren’t going to just take it off us so he thrust two 10,000 yen notes under the till and we all ran out of the shop before she could give it back. What followed was like something out of an old black and white film where they came running after us, managed to grab Sylvain and roll up the two notes into his T-Shirt, so Sean had to once again run back to the shop, put the 20,000 back under the till and then run back to the safety of the bus. Not the best time to introduce Daisuke perhaps.


It was all good natured but there was no way we weren’t going to pay. We thought we were home and dry, but they came up to the bus to wave us off smiling and looking a little embarrassed at taking the money before granny spotted her chance and threw the money back into the bus onto the stair-well as we were closing the doors. Once again Sean had to push it back into their hands, jump back on the bus and shut the doors sharp-ish. Lovely people and the lunch was well worth 1,000 yen each. 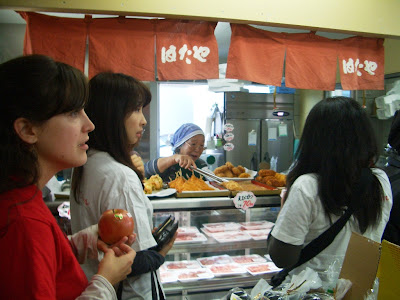 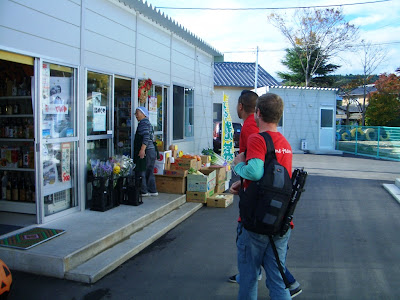 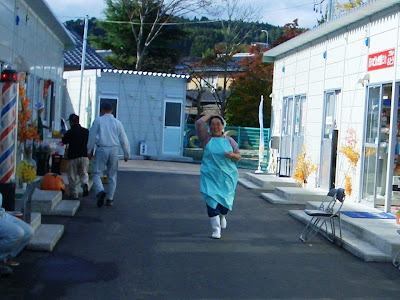 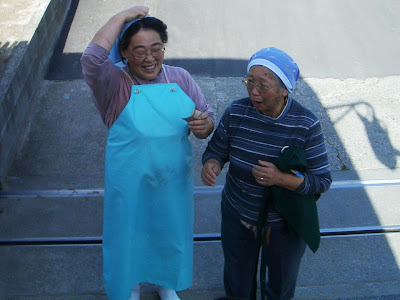 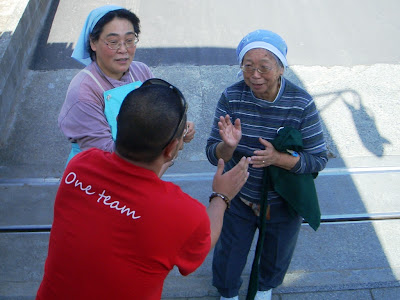 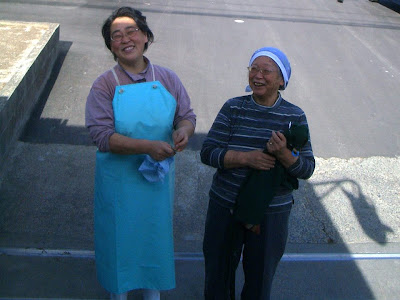 We made it back to Iwaki with a few minutes to spare and made our way to the very swish looking arts centre where the event was being held. The mood was certainly more upbeat than previous trips. The focus for this one day seemed to be on celebrating how far we’d come, instead of how far there was to go. There were other days for that, today was meant to be a thank-you and a celebration.

They opened with a couple of speeches from the head of hte organizing committe and the city mayor before showing a collage of volunteer photos set to the sounds of “I Love You Baby, Fukushima” which is a regular sing-song on the bus on the way back. I took a dodgy shaky video which I'll try to upload on YouTube at some point.

There was then a panel discussion hosted by the main organizers of the VC with ten folks who had been heavily involved, one being the THJ main man himself, Sean Muramatsu. The others were teachers, a long-term volunteer, a surfer, a real bunch of characters. There were a few serious moments but overall the tone was of sharing good memories and stories. One guy said it was hard to describe volunteering as “fun” after the thousands of people that had lost their lives in the tsunami, but for him, looking back, the teamwork, the friendships forged, the memories made, meant that in hindsight there really were moments of “fun”. I know what he meant. 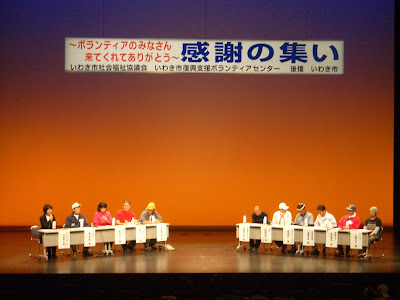 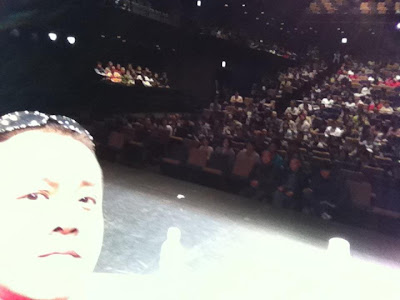 They closed with a concert by The (big-In-Japan) Gospellers. A young doo-wop five piece who could actually sing and spent as much time telling stories and chatting as they did singing. The guy singing the bass-lines sounded like Barry White but I’ve seen more meat on a butcher’s pencil. He was a skinny little bugger but couldn’t half hit those low notes. 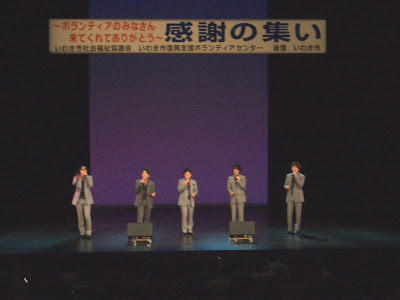 I had chance to chat to the surfer from the panel discussion during the interval. He lived in Kooriyama, Fukushima and said he hadn’t surfed since the tsunami and was saving the rest of 2011 for volunteering. He might get back in the water in 2012 but hadn’t decided yet. We’d both surfed at Toyoma and both knew the little surf-shop on the front that had been swept away. It was good to hear the guy who owned it evacuated in time and managed to survive. Today was a time for looking forward though. He was drinking Guinness but the bar had run out of beer. I refused his kind offer of a swig of his and toasted him with my fist and a smile. Good guy, hope we both get in the water more in 2012.


The trip back was a little more subdued than usual, mainly due to there being only one beer each and no time to stop to buy more. I’m sure Sean did this on purpose to avoid us peaking too soon since we were heading back to our own THJ celebration event in Tokyo where another 20 or so would be turning up, including the woman who’s grandmother’s house we helped clean-up in Hisanohama, who I miraculously bumped into on the train in Tokyo 3 days later. 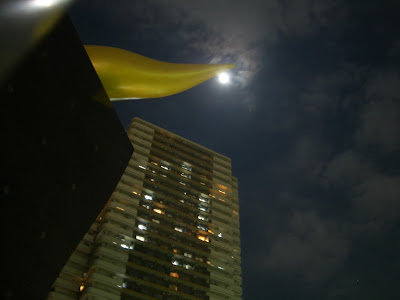 Back in Tokyo in the shadow of Phillipe Starck’s awful Asahi beer building, or as it’s known locally the Unko (Turd) building, we kicked off our own event. During my opening toast I was wishing I’d had more than just the one beer on the bus but everything seemed to go OK. I tried to convey the feeling that we were all lucky to have been part of the THJ effort and this meant anyone who had ever attended, donated to, publicised or supported THJ in any way since their first missions in April. The team have become like an extended family and I know I've made some friendships that will probably last a lifetime.

Even though we were from very different backgrounds, with different interests, there are things that we won’t forget. More than just the devastation up North, there were the people we’ve been lucky to meet up there, the characters, their stories, their hardships, their optimism. The team work, the buddy system, the mud and the sweat. The kids we met, Dirk with his balloon animals, and the smiles on the kids’ faces. The emotional goodbyes after a job and the tears of gratitude. The speeches in the bus coming home, all the songs that were sung, and the new facebook friendships forged every Sunday morning after every trip. And at last, the first signs of a slow recovery.

This was what I remember from the trips so far, and a big hats-off to Sean, Daisuke, Taki, Sylvain and all the other Team Leaders for kicking off Team HEAL Japan, keeping it going and making everyone feel welcome.

Sadly I didn’t win the 17-year old whisky bingo prize we kept after being given it by the bear of a guy who’s house we cleaned up on June 4, but fittingly it went to the lad who threw out the most tatami mats that day and probably sweated more than any of us. Who knew he was a black belt in bingo too? 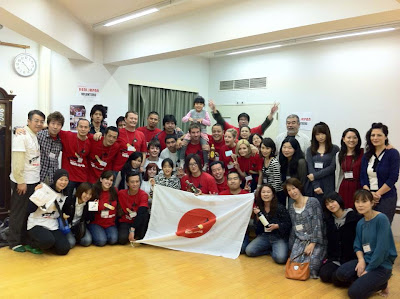 Till next time! There's still plenty more to do.
at 14:52
Email ThisBlogThis!Share to TwitterShare to FacebookShare to Pinterest
Labels: Fukushima, Iwaki, Team Heal Japan, Tsunami