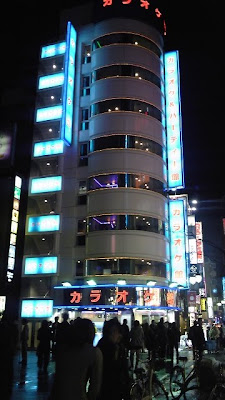 Karaoke in Japan doesn't inflict pain on the innocent like it can do in other countries. Local pubs don't have a karaoke-night with some 18-stone wanna-be (or wanted-to-be) belting out old Bon Jovi tunes for the "benefit" of all. Instead, a bunch of mates will sometimes go to a private karaoke box just for a laugh and some more drinks.

This 8-story building is one of 30 or more of these places alone  in Kabukicho and thousands more in Tokyo. There are over 40 private karaoke and party rooms for anything between two and twenty or more people.

With 2-hour all-you-can-drink deals they're popular with mates just looking for a laugh, company after-parties, the 5-a-side blind-date goukon crowd and I've even heard about folks who are starting a new business but don't have an office yet holding business meetings here. If the meetings go well and they close the deal, they just bust out the microphones and the drinks, and get straight into it.

Foreigners are notorious for not wanting to sing for the first 30 mins, then after being bullied into their first song, you can't get the mic off them. It's not high on my list of things to do on a night out, but there's an incredible number of songs to choose from. Depending on the company I'll either go for Delilah, or You Spin Me Round. If I just want to drink, I'll do Anarchy In The UK... I'm not usually bothered for another one after that.
at 12:05
Email ThisBlogThis!Share to TwitterShare to FacebookShare to Pinterest
Labels: Karaoke Kabukicho