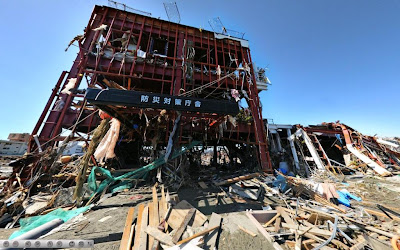 This website has a bunch 360º panorama photos of various locations up North and puts you uncomfortably close to the disaster sites. Click here

The red frame above is all that's left of the crisis management centre in Minamisanriku's town hall. It took me a while to realize that this was the same building where immediately after the earthquake, 24-year old Miki Endo stuck to her post on the second floor shouting out tsunami warnings over the town's loudspeaker system telling people to run for higher ground.

She played a huge part in saving the majority of the town's survivors, and remained in the building shouting out warnings until the tsunami struck. One of her colleagues saw her swept away and her body has not yet been found.

A 60-year old survivor who heard her warnings and headed for higher ground told her mother: "I heard the voice of your daughter behind me the whole way."

This is her story from NHK World.
at 02:30
Email ThisBlogThis!Share to TwitterShare to FacebookShare to Pinterest
Labels: Tsunami