Last Friday I went back up North to Miyagi prefecture with Yoshida-san, the guy from East Wind Ministries that I met at Second Harvest Japan over a month ago. Seven weeks after the tsunami and some supply lines are starting to get re-established but there's still a long way to go. Small businesses, supermarkets, corner-shops and home centres are opening up around Ishinomaki, which is one of the main towns on the coast not far from the capital Sendai.

The main goal was to deliver food and supplies to home refugees in Onagawa and Minamisanriku. Others set up soup kitchens in Nobiru which is on the other side of Ishinomaki and others were cleaning up houses and clearing out the sewers and drains in Ishinomaki itself.

It's been seven years since I first came through this area. Living in Sydney at the time, a surf-trip through Tohoku (NE Japan) helped me decide to move to Tokyo in 2005. I took the coast-road wherever I could and ended up passing through what seemed like every small Pacific-facing coastal town in Tohoku. The beaches and ocean reminded me of Australia, the hills and forests reminded me of Wales. 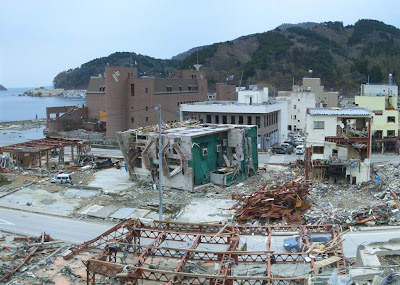 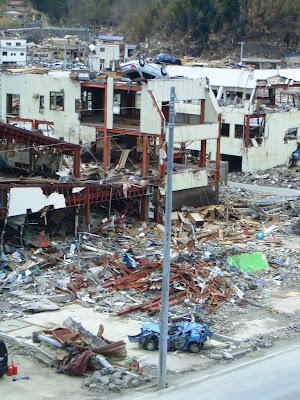 Click on the pano below for a closer look.

The guy who took us here said that when the tsunami hit, the water completely covered the grey five-storey building in the middle of the photo above. A few people had escaped to the roof-top but then had to climb to the very top of the water tank. They managed to hold on and survived.

I took all these photos above from the hospital car-park which is up on a hill. If you look out to sea in the photo above, you'd think this carpark would be a safe evacuation zone but even this wasn't high enough. The tsunami overflowed the whole car park by a couple of metres and went on to fill the whole first floor of the hospital behind. Every car in the car park and most of the people trying to shelter here were washed away. 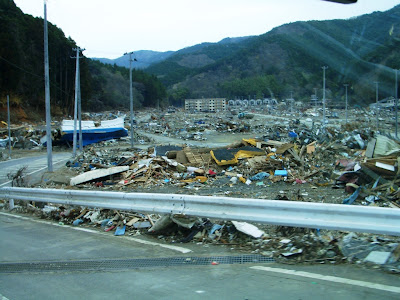 This is the other side of the hill from the hospital and just beyond this picture there are people living in houses which are pretty much OK. Water-damaged but structurally sound. These were the home refugees who we'd brought the food and supplies for. The evacuation shelters now have their established lines of supply from the government and other agencies but these people can't register as their homes are still standing.

Those who can leave have left, but those who are still here can't sell their house and move (would you want to buy?) they can't sell their car as it's gone, they have no other family plus they've lost their jobs. Eventually the shelters may find room for them as others move out into temporary housing, or they may find a way to move out for good but in the meantime they just need help while things get figured out. 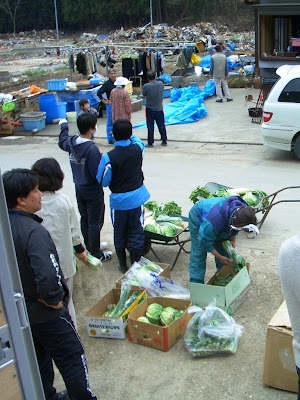 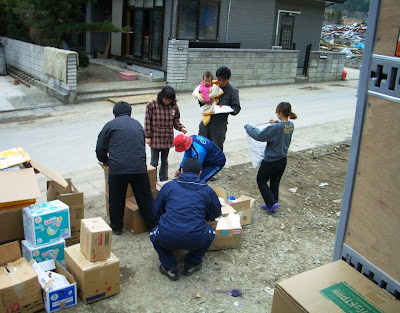 We hadn't arranged a specific time to drop the stuff off, but when we pulled up in the truck, people just appeared. Some of them came with wheelbarrows, some just carried stuff home in their arms but they all just took what they needed. No hoarding, no rushing for the best stuff, just very practical and deeply grateful.

Before I left I'd heard that nearby Ishinomaki didn't need additional food supplies any more but the tears of appreciation from one of these old ladies in Onagawa showed it's different around here.

It's great that In Ishinomaki the focus seems to be shifting to cleaning-up and rebuilding, but when you're talking about the whole situation in Japan, there just isn't one answer to the question, "what do they need now?" It changes every day and varies hugely place to place. 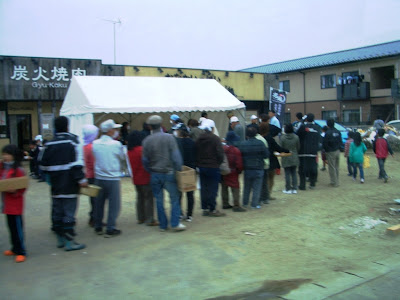 Back in Ishinomaki there were still long lines at the supply points in town. The team I was with have been here since the day after the tsunami and came in from Yamagata. They know the people running the evacuation centre in town well and are organizing a kids concert on Thursday so we stopped off for a bit. 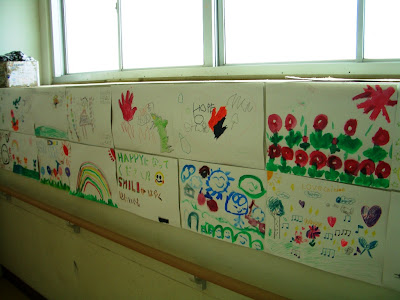 I didn't feel comfortable taking photos inside, and anyone who knows me knows me knows I'm not really an "aren't they cute" kind of kids person, but you'd have to be nearly dead yourself not to be struck by the the optimism in these kids' paintings stuck up on the walls of the evacuation centre. 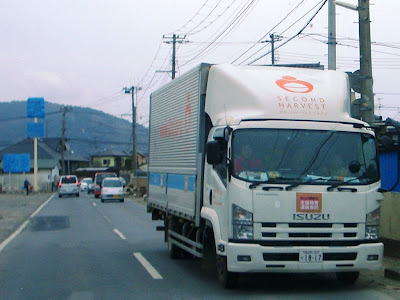 Crossing paths with the Second Harvest Japan guys in Ishinomaki. They've been doing these runs non-stop. 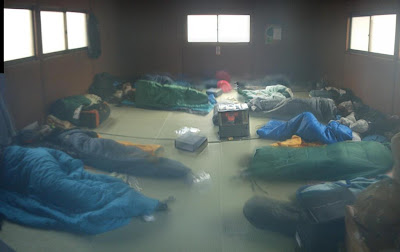 Overnight lodging was free in a log-house at a campground with a volunteer-friendly owner. Before kipping down for the night, I checked facebook on my mobile and realised it was the day of the royal wedding. 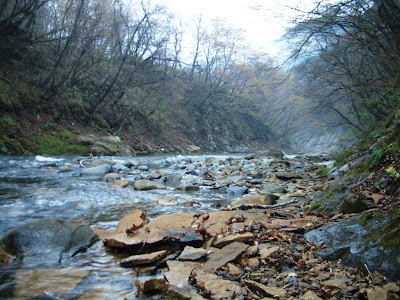 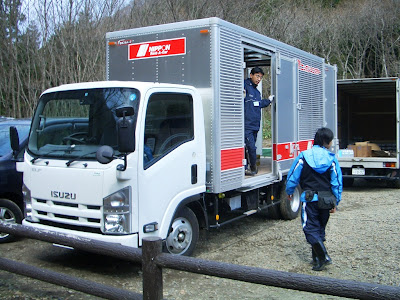 My ten-foot-tall, six-speed, five-litre, six-wheel, two-ton truck. What would Isuzu call such a beast? The Isuzu ELF. This is Yoshida-san getting ready to help load up. We travelled up together from Tokyo on Friday morning and I dropped him off when I left on Sunday so I was pretty much with him the whole time. His English is better than he thinks so we spoke some English but mostly Japanese.

He was a good guy and as I could tell from his East Wind Ministries business card, a devout Christian. I hardly knew him before we left and had been a bit worried he was going to bang on about faith the whole way. Just what you need on an 11-hour drive. All Friday and Saturday he was fine but then on Sunday morning I was sure the moment had arrived. He asked me in tentative English, "So, Phil-san, do you.... do you... do you pray...?" Ah, here it is I thought. Then he said, "...sports?", "Do you pray sports?"

After 6 years here I'd been caught out by the old "r" and "l" mix-up again, and should have known better anyway! 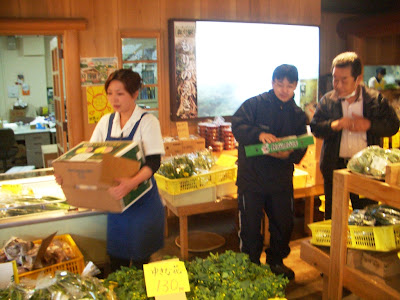 We stopped off to buy some veggies at one of the local businesses that are back up and running for today's run to Shizugawa which is bascially the old name of Minamisanriku. The owner of the veggie shop was a good bloke who when he realised I was from Wales, supportively said he loved Old Parr Scotch. Good on him though, he gave us a couple of extra trays of bananas and kiwifruit to take with us. 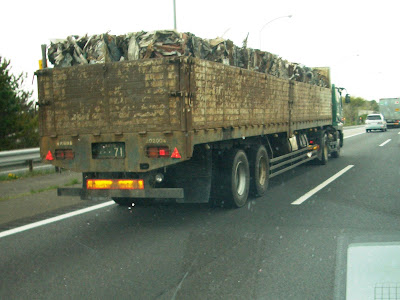 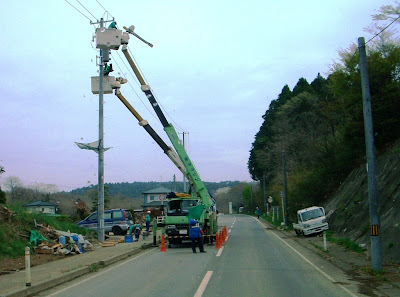 Putting the poles back up. 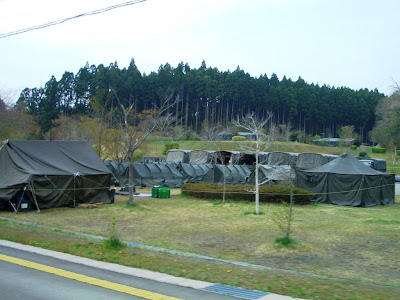 Driving into Minamisanriku the Japanese Self-Defence Force (JSDF) tents and trucks were everywhere. These are the guys doing the real heavy lifting. They were the guys who cleared the main roads for traffic in the first few weeks and there is still no end in sight. 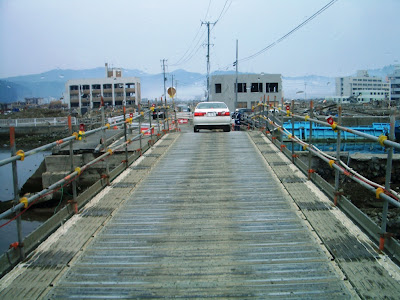 Coming over the hill into Rikuzentogura, the main bridge in town had been washed away so the JSDF had built this temporary replacement. This one small bridge cuts 15 kms off the journey from Ishinomaki and opens up a much wider area South of here for the recovery workers. 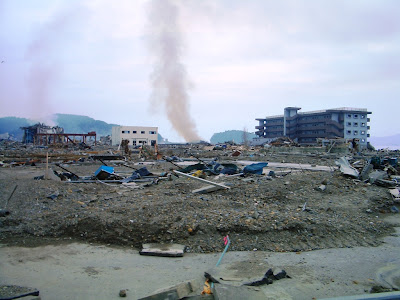 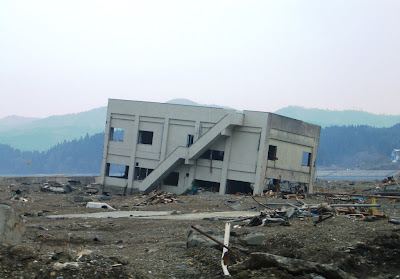 We were heading about a kilometre further round to deliver food and goods to more home refugees whose houses were on higher ground. There are about 100 homes in the area without power or water but in good shape and providing shelter for about 400 people.

We'd called the town's officer-in-charge, the chief, on his mobile phone beforehand and arranged to meet him at a specific meeting point at 11am. We had a good run and got there early at about 10:15 but there were already about 30 smiling faces there waiting for us. Most were over 60s with a few youngsters. A lot of working-age families in rural Japan move to the big cities for work then only move back to retire.

The chief was full of energy and doing a great job in keeping everyone's morale up. When they'd received some food parcels the week before he had them all playing rock-scissors-paper to decide who got the tastiest goodies.

Everyone helped to unload the truck. I was in the back pasing down boxes and was trying to keep the lighter ones for the older women. It was nearly impossible though and as I slowly passed down this box of food weighing about 10 kgs to one frail looking old lady, I warned her it would be heavy. With a big grandmother's smile she said, "the heavier the better!"

While we were in the area, the chief recommended we carry on further round to towns along the coast to see what their needs were. We found an old people's home being used as an evacuation centre who said they were basically OK for food but needed a generator, and work. No-one has jobs any more but there is a ready and willing workforce of small industry workers and fisherman who are out of work and willing to do anything. We couldn't help with the work, yet, but Yoshida-san has already sourced a generator for them in Sendai and will be taking it back on Wednesday. 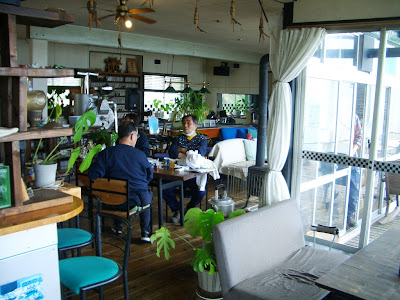 On the way back we found a restaurant overlooking the ocean which was open for business, no meals, but selling fresh-roasted coffee and ice-cream. The owner had always had his own generator for backup purposes so was one of the first to re-open a week or two ago. This spot would have been idyllic under normal circumstances but we spent a pleasant half-hour with the owner and three others. Two of them were old regulars from Sendai who had come down to help with the clean up and another guy had driven all the way from Fukuoka on the Western-most island of Kyushu.

From the deck there was a sweeping view of the coast. The owner was there when the tsunami came and showed us pictures from that day where you could see the water reaching about halfway up to the first window of the building on the left. You could also see islands of debris, what was once Minamisanriku, being swept out to sea.

As we were paying to leave I noticed a home-made mix CD by the till with tracks like Back in Black by AC/DC and Rock'n'Roll by Led Zeppelin. The music he was playing though was very different, very Norah Jones, laid-back, smooth jazz type of stuff so I asked him if he was into a bit of heavy rock. He told me it was a CD his son had put together of his favourite tracks which he liked to play when he was in.

One of the old locals asked how his son was, and where he was... the owner just shook his head. His son was in Ishinomaki when the earthquake struck and had been killed by a head injury when the house he was in collapsed. He took some solace from the fact that his son had not known anything of the tsunami that he'd seen so clearly and had just been showing us pictures of, and the fact that his son was not one of the more than ten thousand still missing. 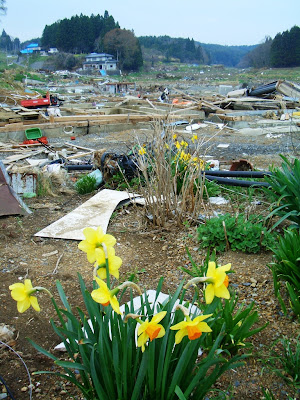 at 22:24
Email ThisBlogThis!Share to TwitterShare to FacebookShare to Pinterest
Labels: Miyagi, Tsunami